Alex was a really great lad, training to be a chef, his ambition was to own his own restaurant one day. He had been an enthusiastic helper at Barrel events, coming along with his Mum & Dad since he was 13 years old. When he was 16, he passed his CBT and put in a club membership form. The other club members had so much respect for Alex, that for the first time in club history he was voted into the club straight away, becoming the youngest ever person in Barrel history to become a Full Club Member.

Alex was a real character in the club, he was up for anything and would often take part in Rally Games etc, and loved to party and dance with the ladies in Rally Marquees. He would always go out of his way to help friends out; he once rode his 50cc bike from Luton to Milton Keynes, to show a friend how to make scrambled egg! If he knew anybody was working on a bike, he would be there to help and learn from those with more experience. In short, everybody that knew Alex well, talked of him as a friend, and he loved to make new friends.
His enthusiasm for the David Cooper and Jumbo Runs, was typical Alex, always willing to help anybody he could.

He died while helping a friend, an epitaph for any man to be proud of.

At approximately 5.30pm on the 18th April 2007, 18 year old Barrel Bikers Mcc member, Alex Titterington, Young Alex, was giving a friend a lift home on his restricted Bandit 600. A car stopped at a T-Junction to wait for a gap in the traffic before turning right onto the busy single carriageway road. Alex was riding below the speed limit, with his headlamp on, in a good position on the road, riding as he had trained to do. The car then accelerated straight into the side of Alex’s bike, killing him instantly and severely injuring Jojo, his female pillion passenger. A biker and his wife driving past in his car stopped and tried to do what they could; the paramedics that arrived within minutes couldn’t do anything for Alex, but did an amazing job looking after Jojo, who is now out of hospital after the first of many major surgical operations on her knee and her elbow.

The Police later informed Alex’s family that he didn’t even have a chance to react to the situation, not even a chance to apply the brakes; the car driver was arrested on the spot for causing death by dangerous driving.
The police action and the court hearings will take most of the rest of the year. 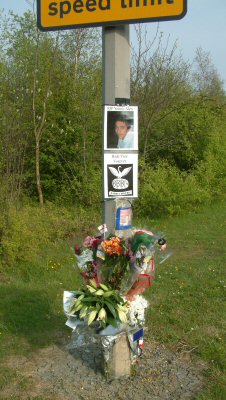 On the 1st May 2007, Young Alex was laid to rest in the New Bradwell Cemetery.

The funeral cortege gathered at The Plough, the Barrel Bikers home pub, that Alex had helped to refurbish, when another club member took over the lease last year. Over 250 bikes gathered to follow the hearse, representatives of many clubs and organisations, along with loads of individuals, turned up to say farewell to this likeable teenager.

The trike hearse, got caught in traffic on it’s way to the pub, so Alex was running on Barrel Bikers Time to the end.
The escort in front of the hearse, consisted of three Barrel Bikers bikes and two bikes and a trike representing two other local clubs, BTW (Brotherhood of the Third Wheel) & Havoc Mcc. The procession took several minutes to form up behind the hearse, and was so long that extra marshals were needed to cope with the full length of the column of bikes are cars through the Milton Keynes roundabout system.

Special thanks to Ogri Mcc, National Chopper Club (NCC) members and everyone else that helped out with the marshalling.
After the burial, everybody went back to The Plough for a free drink and some food (paid for by one of our Barrel Bikers members, thank you!), and another Barrel member got his band together to perform an impromptu gig in memory of Alex in the evening.

A collection that afternoon and the evening raised £1750 for the David Cooper Memorial Run, a charity run that Alex enthusiastically took part in.

Click here to view streaming video
Huge thanks must go to Kate, Russ, Penny & Crew, thank you all!

We can’t express how overwhelmed we all were at the number of people who turned out to give Alex the most amazing send off possible. Alex deserved nothing less, he was a smashing lad, who was on the brink of turning into one hell of an amazing adult. But that has been taken from us all, way too early, by a un-alert car driver.

We, Phill, Zena, Mole & James, can never say thank you enough for everything everyone did for us, from the Police, Paramedics & people on the scene to a txt or email message, the love and support that everyone has shown has helped us in our deepest darkest hours. The Police also deserve a huge thank you, as the support Dave, John & Ray have shown us has helped immensely.

Since Alex died, a collection was started in the name of The David Cooper Memorial Run. A charity which Alex loved to take part in every year. At the BMF 2007, we presented Elsie with £2400! So thank you all very much!

Alex is sorely missed, and has left a deep, dark hole in all of our lives. But for the fact he lived, we have to be hugely grateful.

Thank you again to everyone.