This last year the charity we supported was Redway School, a local school for special needs children. Today we were please to present them with a cheque for £2294 at their annual fete:

This years charity is The Redway School, a local school that specialises in supporting special needs children. We have raised over £3000 for the school this year and it was our pleasure to see some of the staff and pupils from the school at our recent custom show: 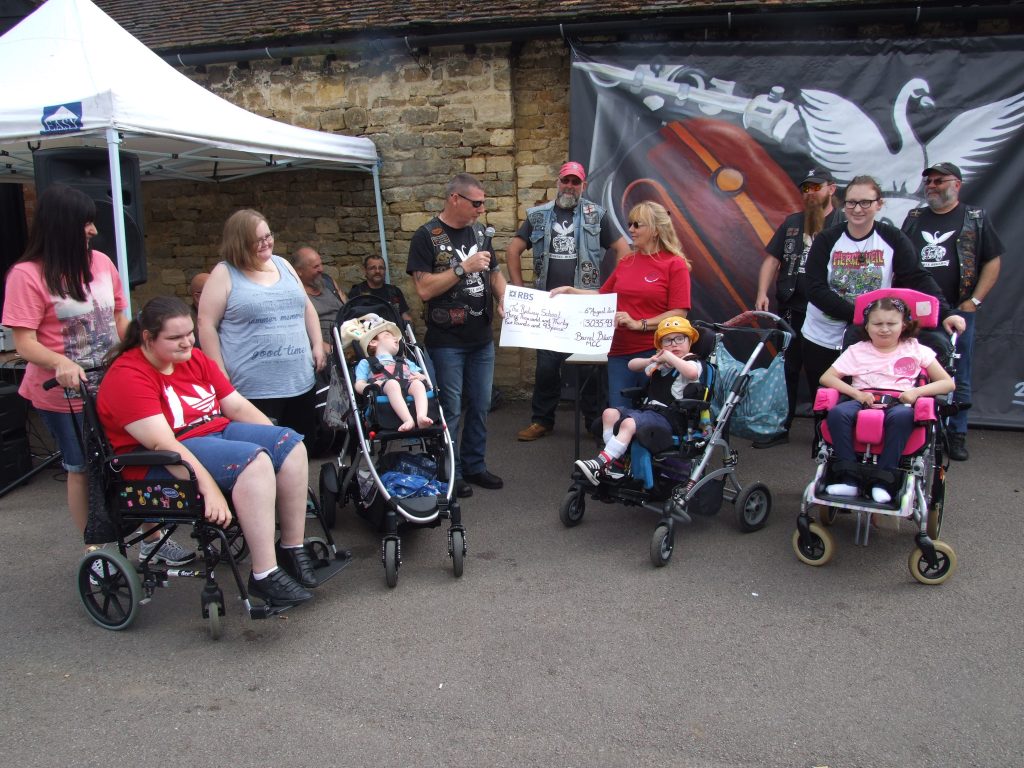 At Easter we did our usual pet food run to Hula, a local animal shelter:

This year once again we at the Barrel decided not to send each other Christmas cards, instead at out Christmas meal we put the money in a pot that we would have spent on them.
A few of us braved the cold to ride over to Hula animal rescue and hand over £125. They were as always very grateful: 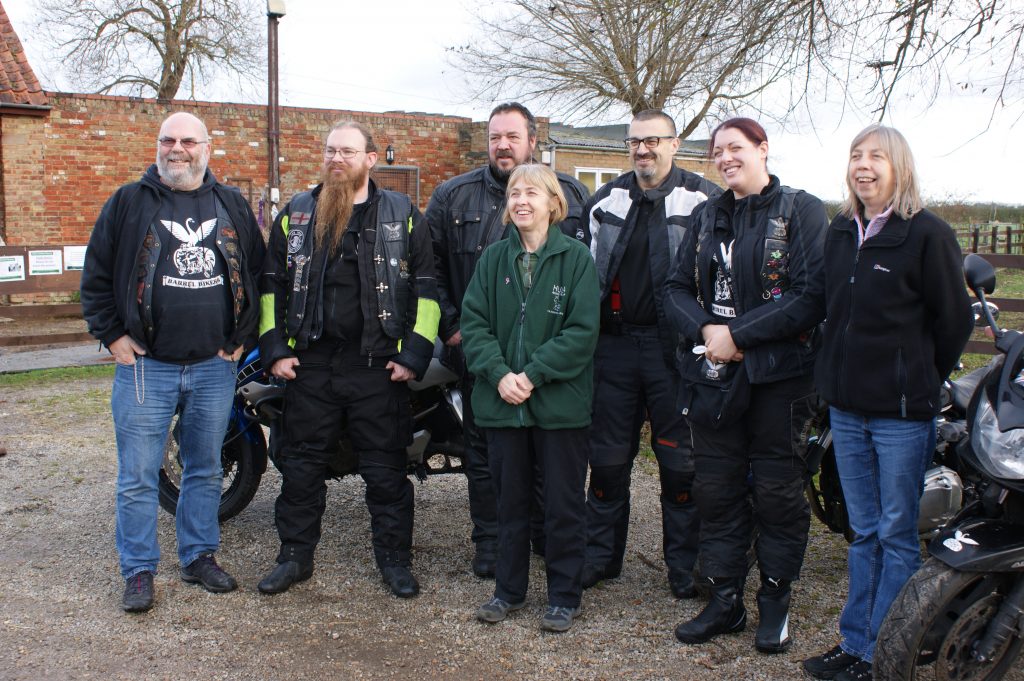 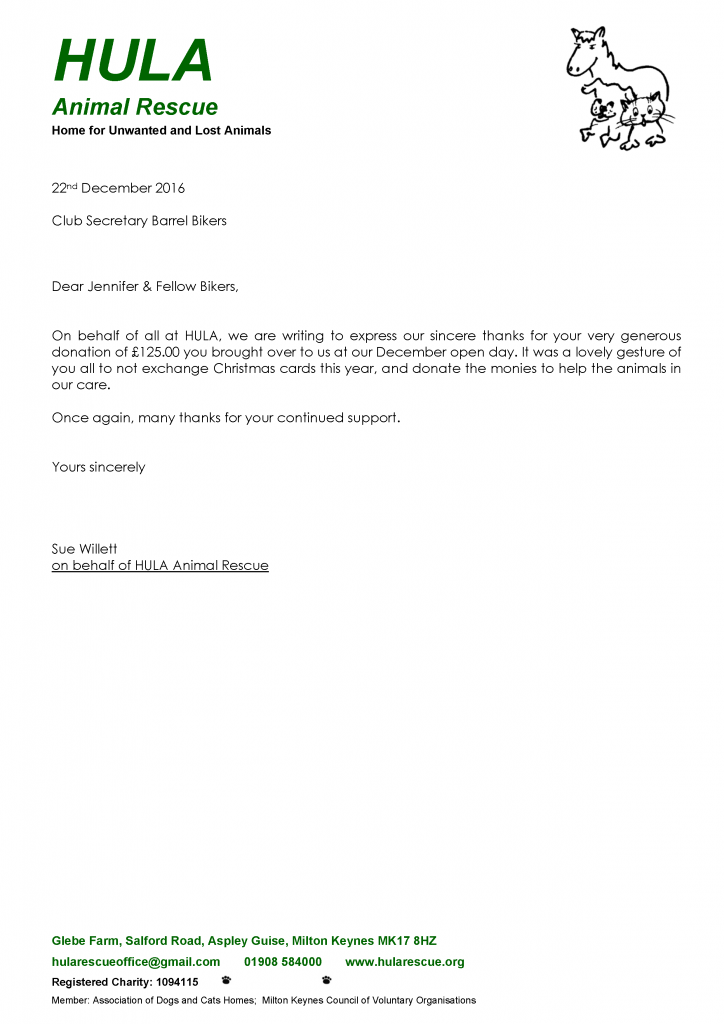 Every year, we pick a good cause to support. Our charity fund raising last year was for Young Minds, a charity committed to improving the emotional wellbeing and mental health of children and young people. We raised £2068 for them over the course of the year at our various events. Needless to say, they were very grateful for the donation and we are always grateful for the people who donate when we fund raise 🙂

Since it was the first day of spring we did what we do best: ride our bikes and help someone out. On Sunday we collected a load of pet food together and had a run to a local animal shelter, HULA. We then did tea and cake at Castle Ashby; very civilised 🙂

Thanks to Nicola for organising the whole thing and to Duncan & DM for leading the ride-out.

At our Christmas party, we had a whip round and raised £100 for Hula, a local animal sanctuary. Webby, Duncan and Malcolm presented the much needed cash to them this week:

As an update, the people at Hula sent us a very nice letter: 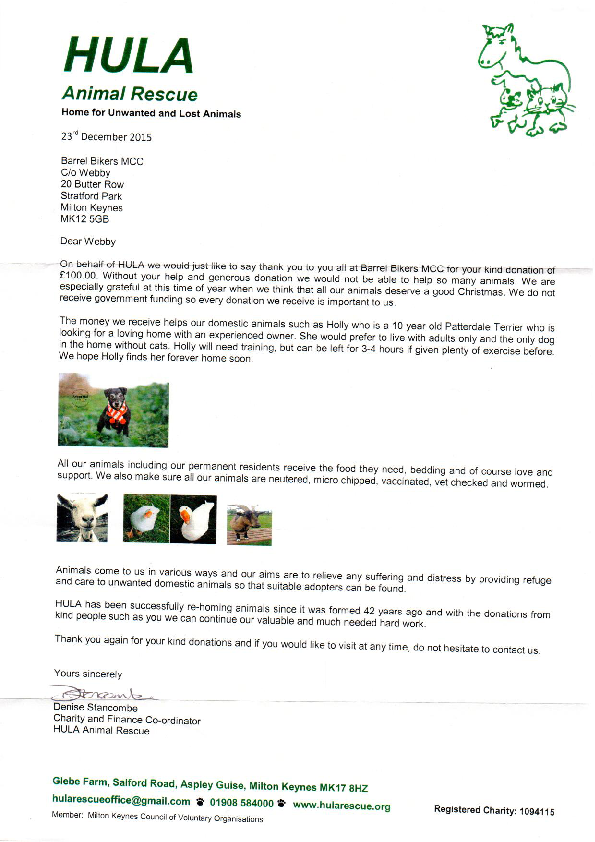 Earlier this year we helped out with the Penn Road Street Party, a street party held in Fenny Stratford to raise money for local charities. We recently received a letter of thanks from the organisers:

As the Chair of the Penn Road Street Party Committee I am writing to thank you for all the help that the Barrel Bikers provided towards the Penn Road Street Party 2015.
This year we chose to split the proceeds between Carers MK and Young Carers MK. We raised just over £1,500.
Numerous Barrel Bikers helped in many different ways, in particular lending us lots of equipment, helping to set it all up, and setting off the fireworks (which were fantastic). Big John also brought loads of pasties up from Cornwall and Tim James provided the Young Carers with tickets for ice skating at Alexandra Palace. Tim also won the Start Prize in the raffle!
I am pleased to confirm that every single penny people spent on their tickets, and every single penny people spent on raffle tickets, has already gone to Carers MK and Young Carers MK.
Once again everybody had a great time and it wouldn’t be possible without the help of the Barrel Bikers. Thanks again for your continuing support and please accept my apologies for not writing to you sooner.

Yesterday we had an amazing morning riding up to the guide dog breeding centre to hand over a cheque for a huge £3341.71 thank you for such a warm welcome once again!

Wow what a wonderful evening we had handing over a cheque to Macmillan cancer Support
£2,142.46
A HUGE THANK YOU
To everyone who supported and helped us raise this!